Sales at Broadwest's luxury condominiums under construction in Midtown began this month for an opening late next year — just before Four Seasons finishes its luxury residences downtown.

The Residences at Broadwest will share a 34-story tower with Conrad Hotel, Hilton's 4-star brand, at the intersection of Broadway and West End Avenue.

"Four Seasons and Broadwest are the first two condo buildings in Nashville that have access to hotel services," said Zach Goodyear, a Realtor marketing Broadwest's 196 homes. "I think things like this help kick-start development in the area and big investment dollars. So it will be fascinating to see what these few blocks look like in five to 10 years."

Across the street at 1601 Broadway, Scenic Investments has plans for 440 apartments and a collaborative music space at an existing parking lot. 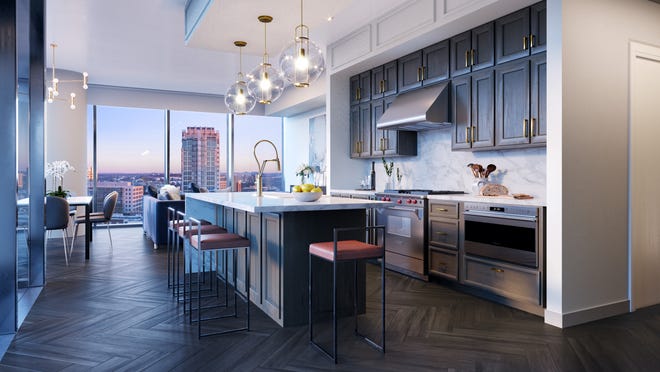 Previously, the site was known as "Lake Palmer" because former owner Alex Palmer left a deep excavation pit there for years after his development deal fell through. It would fill up during rain storms.

Now, paving for a 1.5-acre plaza connecting all the buildings will begin soon. Glass is already going up on the 21-story office tower and the residential building that will also include Conrad Hotel's 234 rooms.

Propst Development will build condos on the top 20 floors of the residential tower, with the bottom 14 stories used for the hotel. Each will have separate entrances and mostly separate amenities. Residents will be able to order hotel room service.

One, two and three-bedroom Broadwest condos are for sale beginning at $559,000 and topping out at $4.5 million.

"We remain very bullish on our investment in Broadwest," Brown said. "The condominium — and residential market in general — remains strong in Nashville and we don’t see that changing anytime soon."

Condo features include floor-to-ceiling glass windows, Sub-Zero and Wolf appliances, marble countertops and herringbone wood floors. Residents will have access to a 24-hour concierge, an outdoor lounge and pool, a fitness center, a golf simulator, bicycle storage and other amenities.

A sales gallery with two model kitchens and a bathroom is now open at 113 17th Ave. N. and appointments can be made at BroadwestResidences.com or by calling 615-925-3875.

"We planned on opening a sales gallery a few months ago and slow-walked with all the COVID-19 stuff," Goodyear said. "It's been a learning curve. But we've had a good response. As of today, we have eight condos under contract and in the works."