At Broadwest, Nashville scores another luxury hotel: 'It's going to be absolutely beautiful'

A new full-service luxury hotel is coming to Nashville.

Nashville Tennessean
By Sandy Mazza
May 22, 2019

Conrad Hotel, Hilton's 4-star brand, will open a Nashville location in late 2021, project leaders said Tuesday. There are currently only six Conrad Hotels in the U.S.

It will anchor the largest of two towers under construction at the $540 million Broadwest project in Midtown.

The news follows Four Seasons' March announcement that it is building a 40-story tower downtown with 236 hotel rooms that could attain 5-star status. Currently, the Hermitage Hotel is the only 5-star hotel in the city.

Conrad — similar to Hilton's 5-star Waldorf Astoria brand — is set to open before the Four Seasons, which is not slated to begin operation until 2022 or 2023.

"It will be luxury in every way," said Chris Brown, principal of Propst Development. "Nashville is experiencing unprecedented growth and it's not going to stop. It might slow down, but the future of the growth is in this area."

The property adds to a hotel boom that has delivered nearly 6,000 new rooms to the Nashville market since 2016 to meet growing tourism demand.

In addition to the Four Seasons, the Conrad will rival the 33-story JW Marriott that opened last year and the Grand Hyatt under construction. Lifestyle brands Virgin, Moxy and W hotels are also underway, along with many other lifestyle, boutique and limited-service options.

The 14-floor, 237-room hotel will occupy the bottom half of a 34-story tower at Broadwest, where Broadway meets West End.

Franklin-based Chartwell Hospitality will manage the hotel in partnership with Hilton.

Rob Schaedle, founder and managing partner of Chartwell Hospitality, said some of the hotel's elements will meet 5-star standards. 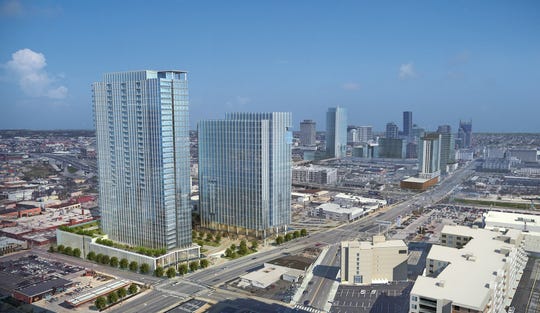 An architectural rendering of the two towers under construction at BroadWest, where Broadway meets West End in Midtown. (Photo: Propst Development)

The rooms are being designed by Champalimaud, which has also produced designs for Waldorf Astoria, Ritz Carlton, St. Regis and other high-end properties.

"The travelers that will be in this Conrad are worldwide travelers," Schaedle said. "They understand luxury, from Dubai to China. It's going to be absolutely beautiful."

Its former owner, developer Alex Palmer, had excavated the site with plans to build offices, apartments and a hotel. But he was unable to secure financing and the giant hole languished, becoming known around town as "Lake Palmer" because it filled up with water during storms.

Now, two red cranes tower over the busy construction site where the first few levels of a parking garage have been installed. 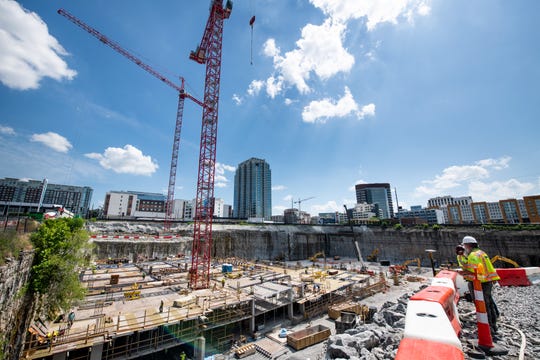 Brown said that Propst moved quickly to develop their vision for the nearly 4-acre property.

"We have capital and a clear vision," Brown said. "We put together a good team, and that's what it takes to be able to pull something like this off."

"People moving in from Seattle, San Francisco, the Midwest and Northeast are so used to the condo world," Brown said. "There is not enough supply to meet the demand we'll see."

Brown said he expects the hotel and condos to appeal to the growing number of workers coming to the downtown area, including those headed to new corporate offices for Amazon, AllianceBernstein and EY.

A second, smaller tower for upscale offices will rise 21 stories.

The two buildings will be connected by a 1.5-acre plaza with walking paths, rideshare pickup areas and retail shops. A smaller building for creative office space popular with tech companies is also planned.

"We think of it as the gateway between Midtown and downtown," Brown said. "The plaza will be the size of a football field. We're excited about it. You’ll continue to see a lot of new development in this area in the next few years."